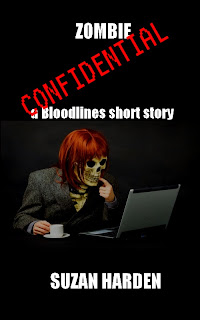 Zombie Confidential, the Bloodlines short story, is now available at Smashwords to download to your e-reader or app. I'll let you know as soon as it's available at other e-book retailers.

Or if you want to read it on Blood Lines, click here.

This FREE short story is my THANK YOU to all you readers who've supported me over the last year.

Blurb
For undead tabloid reporter Samantha Ridgeway, photographing movie star Josh Williams with his latest paramour should have been an easy assignment. But instead of finding him smooching a girl in the hot tub, she discovers his corpse, with a tourniquet around its bicep and a needle in its arm. To make matters worse, his ghost swears to haunt her for eternity if she doesn’t help him prove he didn’t OD.

The more she digs, the more Sam believes there’s more to Josh’s story than even he realizes. Now, she just has to catch the killer before he targets his next victim—Josh’s three-year-old son.

Short story, approximately 13,000 words or 45 printed pages
Posted by Suzan Harden at 1:56 AM No comments:

As of this writing, I'm six thousand words into the Bloodlines short story I'm writing, Zombie Confidential. This is a Sam Ridgeway solo adventure that takes place four weeks after the events of Zombie Love.


The plot was an seedling of an idea for the third book in the series, but I realized early on it didn't lend enough to the overall structure of the Bloodlines saga. However, it was an idea that just wouldn't let go.

In fact, DH pointed out that Sam was too comfortable dealing with a ghost in Amish, Vamps & Thieves when her only previous experience was the seance in Zombie Love. I knew then that this pivotal story involving a dead movie star needed to be told.

As soon as the story is completed and edited, I plan on posting it for free through the usual e-book channels as well as on this blog, hopefully by the end of May. I have to tell you that after two and a half years, it's a lot of fun slipping back into Sam's head.
Posted by Suzan Harden at 11:33 PM No comments: