Where Things Are At - Hero De Facto Edition 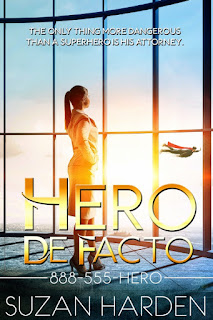 I sadly underestimated the time it would take to implement a couple of my alpha reader's suggestions and to do the final proofreading for Hero De Facto. Since Alpha Reader was able to read it back to back with Hero Ad Hoc, he noticed some discrepancies that I and my extensive notes hadn't caught.

It didn't help when a curious new symptom appeared during the fall and has gradually gotten worse--I'm sleeping longer and longer each day. To the point, I'm only awake for 12-13 hours at a time.

Since I will be considered as having cancer for the next four years, my doctors jumped all over it. Some extra blood work and a sleep study were ordered.

So slicing out 20 hours of productive time per week, the extra medical appointments, and having to go back and re-write a couple of plot points put me way behind in January.

The good news is I delivered the files for Hero De Facto to my formatter this afternoon!

The bad news is I'm going to put it on pre-order instead of straight releasing it like I usually do.

A few of you had problems downloading A Modicum of Truth from Amazon over the first 48 hours the buy page was live last year. From what I'm hearing from fellow authors, the problem has gotten worse with the latest updates Amazon installed for Kindle Direct Publishing last year.

So in an attempt to ensure a smoother delivery, I'm putting the next few books on pre-order. I'll post here once the pre-order buttons become active.

On the plus side, I plan to do a couple of superhero-themed giveaways when the third book Hero De Novo is released in April. All you have to do is join my newsletter group. The sign-up is to your right if you're looking at my blog in fullscreen mode.

In the meantime, stay warm and safe this winter!
Posted by Suzan Harden at 6:00 PM No comments: