Alex was one of the very first medical students at Johns Hopkins, but much to his father's concernation, he left school to join the Texas Rangers.

Email ThisBlogThis!Share to TwitterShare to FacebookShare to Pinterest
Labels: ABBA, Blood Sacrifice, Soundtrack, Take a Chance on Me

Phillippa realizes she still loves Alex, but is it too late?

Phillippa blames her father for the deaths of her mother and sisters, believing that as a god, he could have interevened and saved their lives.

The infamous practical joke for which Phillippa has held a grudge for over a century? Alex jury-rigged a canister of molasses and a box of flour above the front door of the San Francisco vampire coven house (featured in Blood Magick). His intended target was Selene. 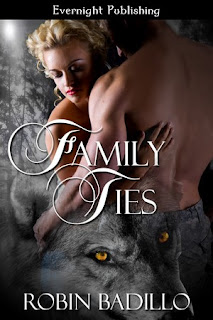 Then there are those folks who'll never admit they've had a paranormal experience like my next guest, paranormal author Robin Badillo.

One might assume that as a paranormal author I’ve probably been inspired by actual events, which in turn sparked my natural attraction to the genre. Alas, no vampires, werewolves or ghosts have tapped me on the shoulder and introduced themselves thus far. Or if they have, perhaps I just wasn’t “open minded” enough to receive the message.

That being said, I’ll admit there have been times when I felt as though someone was watching me, but that says more about my mental state or propensity toward irrational paranoia, than valid evidence of experiencing something supernatural or paranormal.

As an author, those rare events can easily be blamed on an overzealous imagination or muse, if you will. That’s my story anyway, and I’m sticking to it.

Admittedly, it would be awesome to come across any of the creatures I’ve written about. Would I run away in terror at the thought of being eaten alive or maimed? Are you kidding? If a vampire did attack, which is highly unlikely given their broody dispositions, I’d probably ask them to take their time so I could make notes along the way. After all, I wouldn’t want to miss not one snarl, rip or splattering of blood during the process. Research is key when it comes to writing.

If a ghost visited, I’d simply explain that I’ve seen every episode of “Ghost Whisperer” and ask if I could help them settle unfinished business so they could move on into the “light.”

If they were a nasty ghost, demon or other evil, paranormal creature, I’d then reeducate them on the way their kind are properly “ganked” by the Winchester brothers on the CW’s “Supernatural.” I’d then enjoy a messy hamburger and a slice of fresh apple pie after disposing of the “bad guys” properly, just as Dean Winchester would expect of someone in their line of work.

Suppose I were approached by a Blibbering Humdinger, Crumple-Horned Snorkack, Gulping Plimpy, Heliopath, Nargle or Heaven forbid, a Wrackspurt, then I’d grab my eldest daughter, Brittany, and her collection of Harry Potter books and request her assistance immediately. Luna Lovegood’s creative imagination would come in handy when dealing with some of her favorite imaginary creatures.

Then there are the werewolves and shifters. Although, I tend to lean more toward the wolf where shifters are concerned, it’s my belief that a scratch behind the ear and a vigorous belly rub would tame even the most savage of beasts.

I guess, in the end, there would be no need to experience any of these entities in the real world. Books, television programs and movies have brought them to life for me, without the hassle and messy cleanup.

Besides, I’m sure there are plenty of people who have experienced a ghost or unexplained entity in their lives, who may not have found it as exhilarating as I would. Some may even wish the event had never occurred at all. To those people, my hat is off to you, and I congratulate you on your tenacity and will to survive the unknown.

But for those people out there like me, who wouldn’t mind a little peek into the “other world”, I suppose we’ll have to rely on our colorful imaginations, the magic of television, the glamor of cinema, and the wonder of prolific words on a page to sate our curiosity…unless the aliens get us first, then all bets are off.

Every pack needs an alpha and every alpha needs a pack.

Tucker Wilde, a lone wolf, returns to the town where his shifter lineage first began, only to discover his rightful place as alpha has been handed down through another blood-line. To make matters worse, old family secrets threaten the fate of the love he’s destined to find.

Shifter, Tegan Blaid is the key to saving her pack by joining with the son of a powerful pack member, but her heart belongs to Tucker, the one wolf she was never meant to know.

Can Tucker and Tegan fight the forces against them to secure their positions in the pack, or is history determined to repeat itself despite their family ties?

For more information about Robin and her books, click on the following links:

The End of Halloween...Again? - Teri Thackston 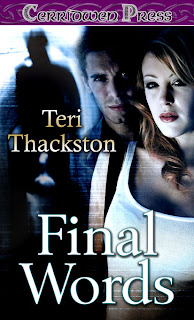 While I'm stocking up on decorations for next year in the post-Halloween sales, Teri Thackston talks about communities *GASP* banning the best holiday EVER!

In some parts of the country, Halloween is becoming an endangered holiday. Trinity Church in New York City is cancelling its popular Halloween Fest due to Occupy Wall Street campers near the church. The police department in Knoxville, TN cancelled its Halloween in the City event because they can’t find a venue big enough to hold all the kids who want to attend. Calabash, NC cancelled its children’s mystery dinner on Halloween due to lack of funds. Several elementary schools are eliminating costume parties that have been popular for many years. Various reasons threaten the holiday at many locations around the country.

This isn’t the first time. Back in the early seventies, rumors—and accurate reports—of poisoned candy circulated, causing parents to keep their little goblins indoors or allowing them only to trick-or-treat to the homes of family members. Most such stories turned out to be hoaxes or isolated incidents, but Halloween suffered for a while many years.

But is Halloween really on the way out? Plenty of communities still plan to go all out to celebrate Halloween this year. Costumes, candy, parties and trick-or-treating…how about your community or neighborhood? Has Halloween been cancelled or is it still going strong?

Now my books don’t have much to do with Halloween (yet). But I do think I spin a good ghost story that’s perfect for the season. For example my EPPIE award winning novel Final Words has plenty of spirits and spooky scenes to have you looking over your shoulder as you read it.

A near-fatal hit-and-run leaves Medical Examiner Emma St. Clair able to talk to the spirits of people she autopsies. With his sister’s hit-and-run death unsolved, Detective Jason MacKenzie vows to bring this lethal driver to justice. When a serial killer throws them together, will her ability to talk to ghosts prove deadly…in love and life?