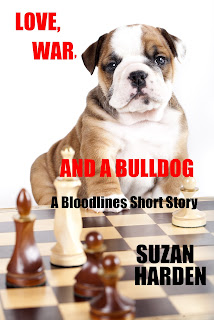 As some of you may know, I broke down and tackled Joe Konrath's short story challenge a week ago Thursday. Joe's kind enough to promote our books this weekend. He also encouraged us to try out KDP Select, which I planned to do later, but what the hey?

For those of you awaiting patiently for Blood Sacrifice, this challenge really helped spur me into getting the damn novel done. As in 10,000 words written since I completed the challenge. And I'm literally writing the story backwards, but I'm not going to question this method since the book is getting finished.

Love, War and a Bulldog takes place once everyone returns to Los Angeles after the events of Amish, Vamps & Thieves and Blood Sacrifice. There's no major spoilers.

Okay, maybe a minor one. But seriously, folks, if you haven't figured out who Phil's dad is by now, look up "Amazons" on Wikipedia.

So here's the deal--

1) Love, War and a Bulldog is free now through Tuesday, September 3, on Amazon US only. Click here to download.

[Edit: Amazon has made it free on other country sites as well. It already has downloads from UK and Germany. I've changed the link so it will take you to the appropriate store. Please let me know if you have a problem.]

2) If you're a pure-ist, download it BUT don't read it until after you've read Blood Sacrifice.

3) Love, War and a Bulldog won't be available at other online stores until December 1.

4) I'll try to do a free period at the other sites, but the best I can guarantee is a Smashwords coupon. (I know. You'd think Apple, B&N, etc. would get a clue about these types of temporary sales.)

5) If you absolutely want it now, but you don't have a Kindle or you absolutely refuse to get a Kindle app, my books are DRM-free, You can always convert the Amazon file through Calibre or any other conversion software.

So what the hell is this story about?

Emerson O’Malley, a were-bulldog, has been trapped in his canine form since the day he was born. Even worse, the likelihood of him losing his virginity is zero. But when he rushes in to rescue three nymphs, he pisses off the Greek goddess Aphrodite, who curses him into human form. Does he take advantage of his one night with the woman he loves or does he save Los Angeles from the goddess’s wrath?

P.S. Emerson and his ladylove Agnes made their first appearance in Zombie Love.

This post has been removed in accordance to distributors' contracts since it displays more of the book than the sample limit.
Posted by Suzan Harden at 8:00 AM No comments:

This post has been removed in accordance to distributors' contracts since it displays more of the book than the sample limit.
Posted by Suzan Harden at 7:15 PM No comments:

Why! Why! For the Love of All That's Holy, WHY!

Isabella, my beloved work laptop, passed from this world at 5:34 p.m. Tuesday afternoon. I'm heartbroken. She was a good laptop. A gentle laptop. But old age caught up with her. She was seven years and five months, positively ancient for a computer, but she was my constant companion and she will be missed.

While I have full backups, and my second stringer, Ivan, has jumped into the game, I've lost two days of productivity for both writing and packing. So no writing, no editing, no blogging because I still have a hell of a lot to do before the moving truck arrives on Monday.

My sincere apologies to all of you waiting for the next chapter of Blood Sacrifice. I'll post it as soon as I can.

Posted by Suzan Harden at 2:32 PM No comments: