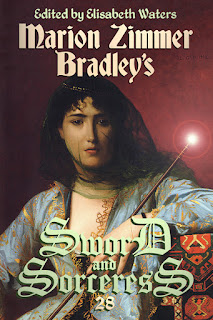 Something stinks in the city of Orrin, and it's not just the scent of pigs on the fake priestess who pleads for assistance from Justice Anthea and Brother Luc. Investigating the girl's claim that her lover was kidnapped leads the duo into a plot against the crown. A plot they may not survive. 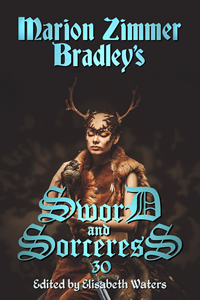 "Diplomacy in the Dark" - Sword and Sorceress 30

Investigating unusual deaths falls under Justice Anthea's purview, and the captain of Mars Tranquilus freezing solid in his heated cabin definitely fits the bill. But will Anthea survive long enough to discover what was in the demon-contaminated casket the captain brought back from the Far West? 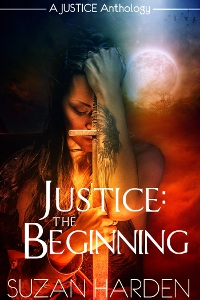 For the first time, the Justice Anthea and Brother Luc short stories are collected in one edition.

This anthology includes “Justice” and “Diplomacy in the Dark”, previously published in Sword and Sorceress 28 and 30 respectively. A brand new story “The Perfect Partner” gives readers the infamous tale of the illicit lovers’ first cantankerous, and odiferous, case together.

And a fourth bonus tale, "Courting Trouble", set in the Justice universe tells how a young sister of Light became a secret bodyguard for a member of the Jing Imperial family.

Magic, mayhem and mystery has never been so fun! 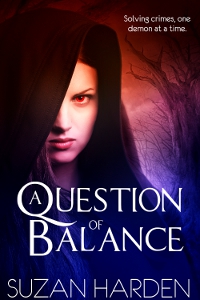 A QUESTION OF BALANCE

The Reverend Mother’s machinations left Anthea as the chief justice in her home city of Orrin, a post she despises. Even worse, a messenger from Duke Marco interrupts her breakfast. Again. This time, the duke’s retainers found a body in a wine barrel at the duke’s estate. The body of a priestess from the Temple of Love.

In trying to solve the bizarre murder, Anthea and Luc stumble across a massive conspiracy to eliminate the Twelve Temples, the only thing standing between the human race and another demon invasion.

Will swords, magic, and wits be enough to stop the renegades?

Or is a little faith needed? 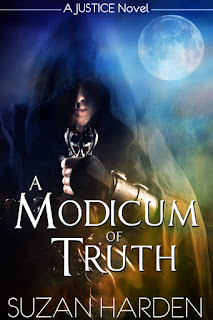 A MODICUM OF TRUTH

The Temples thought they’d defeated the demon scourge and drove them back to their dimension a century ago. But the demons never left…

The pardon from the queen of Issura didn’t bring the freedom Anthea, chief justice of Orrin, had hoped. Instead, she and Luc are drafted to investigate the Temples in the city of Tandor. Not only has the high brother of Light been implicated in the demon conspiracy, Anthea’s fellow justice has been sending reports that are just a little too perfect.

But their initial mission takes a backseat when a high-ranking foreign priest informs them renegades smuggled a cache of demon eggs into Tandor. And if those eggs hatch, the demons will devour the world.

How can Anthea and Luc stop the renegades when they don’t know who to trust?

Magic and mayhem have never been this dangerous. Or this deadly. 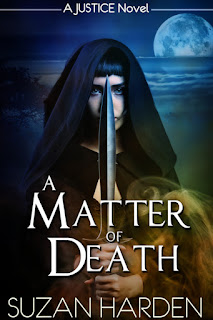 A MATTER OF DEATH

Two skinwalkers controlling Tandor had been bad enough, but then a demon army waltzed up to the city gates…

Anthea, Luc and their allies are trapped inside the border city of Tandor. They’ve lost all contact with the rest of Issura and their neighboring countries. And if the demons get by Tandor, the entire continent will become their dinner table. But the city is low on food and more importantly, water.

Can Anthea and Luc find a solution? Or will they be forced to activate the final defense spells of Death to stop the demons, and kill everyone in Tandor and themselves in the process?

Magic and mayhem have never been this desperate. Or this fatal. 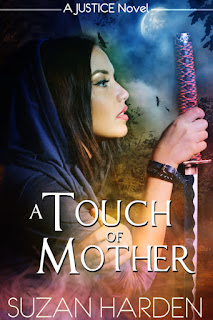 A TOUCH OF MOTHER

After the destruction of the demon army in Tandor, Anthea could use the relative simplicity of her position as chief justice of Orrin.

However, one of the street children is found dead a few weeks after Anthea’s return. Her squire Nathan is adamant his friend’s death is murder. And High Mother Bianca, who is responsible for feeding, clothing, and sheltering the orphans, doesn’t seem to care about the death of one of her wards.

Does Bianca know more than she’s telling? Or is something worse than a demon stalking the streets of Orrin?

Magic and mayhem have never been this despicable. Or this tragic. 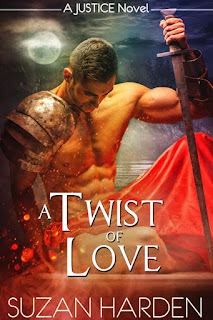 Chief Justice Anthea of Orrin is finally coming to terms with all the changes in her life over the last year. But nothing could ever have prepared her for the depths of her birth mother Gerd’s madness, or the lengths Gerd will go to in order to claim her vengeance on those she believes wronged her.

Including killing everyone Anthea loves.

Magic and mayhem have never been this dire. Or this heartbreaking. 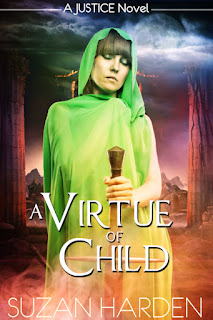 Demon grimoires are illegal. So illegal the mere possession of one mandates a death sentence. But this is the second time the same taboo tome has landed in Chief Justice Anthea’s hands. And this time, she won’t escape the malevolent book’s influence.

Can her friends save Anthea before she succumbs to the demonic influence and join humanity’s enemy?

Magic and mayhem have never been this malignant. Or this soul-stealing.